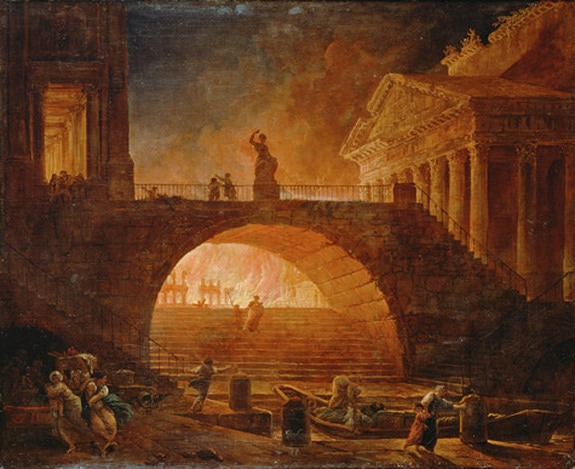 ​ Of course, historical context as well as interpretation is tricky to pin down when a text does not have a specific date of publication, but rather a ballpark estimate. Gathered from sources and lectures, it is observable that there are two dates for the writing of Revelations which are most probable. The first is around 64-70 A.D., during or after the rule of the Roman emperor Nero, before the destruction of the temple. The second is around the end of Domitian’s rule, so 90-96 A.D., after the destruction of the temple (Bahnsen).

For each of these dates there are compelling reasons and evidence to prove their viability, and for each of these dates there is a different historical context. We will begin with the first date, during the rule of Nero. In 64 A.D. Great Fire of Rome occurred, which Nero blamed the Christians in the city for. Using this blame to excuse his behavior, he then tortured and killed many Christians for their supposed treason against the Empire, having them torn apart by dogs, crucified, and even used as torches during the night (Tacitus 380-381). This historical context makes for strong evidence for this earlier date: John’s hatred for and tone of rebellion in Revelations makes a great deal of sense when one takes into account that this may have been written during intense persecution of Christians. This historical context then influences interpretation, as some who believe Revelations was written during or after Nero’s reign believe the beast was meant to represent him. Immediately after Nero’s reign there came a quick succession of four rulers who ruled for a year at most, some as short as two months. This time was full of civil war and political unrest (Kooten), which lines up very well with John’s predictions of the fall of the Roman empire.

​While the case for the earlier dating of John seems strong, there is also strong evidence that John wrote the Apocalypse during the reign of Domitian. Although Domitian was tyrannical and violent (though these things have been somewhat exaggerated), he did not specifically persecute the Christians (Wiseman). This is not to say, however, that Christians were not persecuted during this time. Christians in this time would have faced the typical hardships that imperial life presented them, but not ones as focalized and brutal as those of Nero’s reign (Wiseman). John, himself, claims to be writing from exile due to his Christian beliefs. To understand these hardships, and the general political and social context John was writing in, we must examine how Christian life was lived under imperial Roman rule. Although Christians certainly faced persecution under imperial Roman rule there was also the fact that, given worship of Roman gods was encouraged, it was difficult to avoid it. The imperial cult, for example, permeated many aspects of life for those living under imperial rule. All sorts of entertainment, such as festivals, music concerts, and gladiator shows, were put on frequently to celebrate the ruler and the empire of Rome. In addition to the imperial cult, the Roman gods pervaded life in the Roman empire, as they were invoked at many meetings, sacrificed to during public events, and part of a Roman education. The most unavoidable part of this life under Roman rule was that, as the imperial cult and the Roman gods pervaded most aspects of life, they also tied into economic standing. Any associations that a worker might associate themselves with would most likely sacrifice to a god at their meetings. Therefore, John was writing in a social and political climate in which he could not avoid the worship of the gods he saw as wrong, where it was incredibly difficult to be a Christian and not compromise your faith by complying with what mainstream society believed in (Barr). ​ 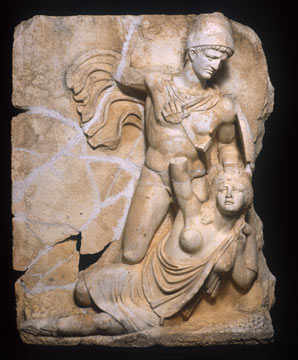 Sculpture at Aphrodisias: Claudius conquers Britannia
Imperial Reliefs from the Sebasteion, 14-68, marble, Sebasteion, Aphrodisias, Caria, Turkey
Now that the general historical context for John’s writing of Revelation has been established, it is necessary to investigate Roman perceptions of gender and gender stereotypes in order to better understand the significance of what John is writing. In the end it boils down to John personifying Rome as a woman (specifically a promiscuous woman) in order to insult the empire. Roman views of women were not favorable. Women were viewed as weak, subservient, and secondary to men. Every positive quality about men was thought to be mirrored by a negative quality in women. Therefore, the fact that John is personifying Rome as a woman in the first place is shameful. An example to better illustrate Roman attitudes towards women is in the Sebasteion in Aphrodisias. In the Sebasteion there was a series of reliefs, all depicting the nations that Rome had conquered. Each of the conquered nations or peoples were represented by women, Rome itself represented by a man, typically the emperor who was in power when that nation was conquered. In Roman eyes, women were something to be conquered by men. Therefore John’s depiction of Rome reverses this. Rome is the woman, and Rome is soon going to be conquered by the people who commit fornication with his. James Benedict, author of “The Great Whore Cast Down, Revelation 17-18 and the Imagery of Roman Conquest”, hypothesizes that this depiction could have been a direct reference to the reliefs in Aphrodisias. While it seems a bit unlikely that John would know of these reliefs, they still demonstrate the values of the Roman society that John was writing in. Even if John had never seen these reliefs, he still lived in the culture that made them, and therefore absorbed similar attitudes towards women. He then used gendered stereotypes in order to further insult Romans in his depiction of the Great Whore (Benedict).

Kooten, George H. van. “The Year of the Four Emperors and the Revelation of
John: The ‘pro-Neronian’ Emperors Otho and Vitellius and the Images and Colossus of Nero in Rome.” Journal for the Study of the New Testament 30, no. 2 (2007): 205-248.
​
Tacitus, The Complete Works of Tacitus, trans. Alfred John Church (New York:
The Modern Library), 380-381.